Recent scientific findings and clinical claims on the alleged therapeutic properties of smoked marijuana raised consistent attention on the opportunity to use cannabinoids to treat several conditions such as including neuropathic pain, chemotherapy side effects, spasticity caused by multiple sclerosis, arthritis, and glaucoma. Most of these ailments are pretty common in the elderly population, and for this reason, the idea that smoking weed for older people could be helpful to manage the symptoms associated with these conditions is gaining consistent ground. The use of this herb for therapeutic purposes within hospices, residential facilities for elders, nursing homes, and home health agencies is becoming widespread, especially since the 1996 California’s Compassionate Use Act, and its 2004 amendment Senate Bill 420, made it lawful to administer cannabis to senior population [1]. Elder people seems to be the fastest growing population of weed smokers in the United States, amounting to as much as 50% of total medical marijuana users. Advocacy groups are fighting to improve the vague and often nonexistent guidelines about using cannabis on older people for clinical reasons, which often leave ample space for legal ramifications and hardships in assisted living facilities [2]. 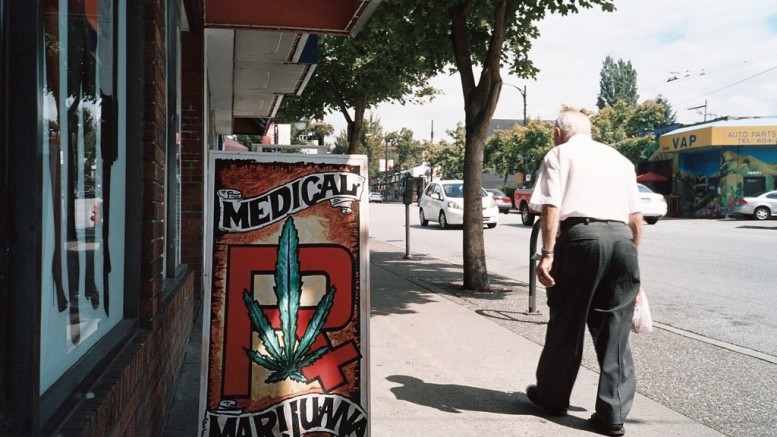 Can smoking weed help the elderly treat their illnesses?

However, even if recent scientific advances helped reaching a better understanding of tetrahydrocannabinol and related cannabinoids’ mechanism of action, clinical data on possible long-term effects and health risks associated with chronic marijuana smoking is still somewhat lacking. Possible benefits should be weighed by assessing potential risks, and as with every other medications or treatment, a complete overview of its effects is mandatory before recommending cannabis to patients. Cannabis by itself can be considered as a pharmacologically “dirty” drug, as it contains several active substances possessing many multiple effects that are often generated by a synergic mechanism of action. In other words, there’s yet no real way to separate adverse effects from therapeutic ones, as its activity is not caused by a single agent, but from their sum. Known effects of the cannabinoids include subjective pleasure, hypnosis, sedation, as well as antiemetic, anticonvulsant, psychotropic and analgesic effects. They also increase appetite, lower intraocular pressure and affect the cardiovascular, respiratory, reproductive, and immune systems [3]. They are often used as analgesics for post-operative pains, and in the management of cancer breakthrough pain, as well for the management of chronic pains, including neuropathic pain, multiple sclerosis pain, and osteoarticular pain [4, 5]. Other medical uses benefit from its anti-emetic properties to reduce the severity of cancer chemotherapy side-effects, and its anticonvulsant properties in the treatment of refractory generalized epilepsy [3, 5].

The potential risks and dangers of smoking marijuana for adolescents, adults and older people

However, marijuana side effects can often be seriously detrimental to both mental and physical health, as many adverse reactions have already been thoroughly demonstrated in both elderly, adult and adolescent populations. Acute cannabinoid intoxication significantly reduces processing speed, attention, learning and recall, perception of time and velocity, reaction time and psychomotor abilities in a dose-dependent fashion, even at usual analgesic doses [6]. Cannabis use during adolescence has been associated several harmful effects that could negatively impact social life. Clinical evidence suggests that smoking marijuana during adolescence may negatively affect academic performance, increase the risk of school dropout, as well as be the cause of broad-based declines in working memory, attention, and executive function during adulthood [7, 8]. Cannabis exposure during adolescence is associated with reductions in gray matter volume and axonal connectivity, causing permanent neurological damage that will undoubtedly reduce cognitive and emotional functions in adulthood [8]. The use of weed for recreational purposes during adolescence is also associated with adult alcohol and drug abuse, a problem that can escalate a to public health issue due to the greater risk of driving accidents and fatal vehicle collisions associated with the use of both these substances [9, 10].

Smoking marijuana can impair several cognitive functions including the ability to organize and solve problems, make proper decisions, remember, and control emotions and behavior. Not only these deficits may reduce and individual ability to learn and apply new skills, but they also reduce the ability to successfully recover from chronic abuse, increasing the risk of relapse to cannabis use [11]. Cannabis withdrawal effects can, in fact, give rise to an abstinence syndrome similar to that seen after withdrawal of benzodiazepines and hypnotics, so it should very cautiously monitored especially when used to treat chronic conditions in older people [3]. Smoking marijuana can also precipitate schizophrenia and other psychotic disorders in vulnerable individuals, often causing anxiety, suicidal ideations/tendencies, and other psychotic symptoms as well as antagonizing some antipsychotic drug effects in patients controlled on neuroleptics [12, 13].

Is it safe for older people to smoke weed?

Other side effects of smoking marijuana include significant cardiovascular and respiratory effects, which can be especially dangerous for the elderly. Cardiovascular effects include appreciable tachycardia, hypotension, and hypertension, and cannabis smoke even more irritating and carcinogenic to bronchial mucosa than tobacco smoke [3]. All these side effects might contribute to the development of chronic cardiovascular conditions or acutely trigger cardiovascular events in high-risk patients. Although the relationship between marijuana use and coronary heart disease is still uncertain and needs further evaluations, recent findings suggest possible harmful effects of cannabis use for patients who survived acute myocardial infarction [14]. As most older people suffer from coronary heart diseases, they can be considered as an high-risk population that’s especially vulnerable to the side effects of smoking cannabis.

Be the first to comment on "Therapeutic cannabis for the elderly"