Passiflora is a medicinal herb traditionally used to treat anxiety disorders and insomnia and for its sedative and analgesic properties. Commonly known as passion flowers or passion vines, Passiflora is a genus that includes at least 500 different plants of the Passifloraceae family. Many of these herbs are cultivated for various purposes, especially because of their highly appreciated ornamental value and delicious fruits. The name of the plant is derived from the small purple fruit itself, known as passion fruit or maracujà, a tasty edible source of nutrients which is also used to produce a sweet juice. The plant itself is a climbing vine whose flower got its name since Spanish Christian missionaries found a resemblance between its various parts and several symbols of the crucifixion of Jesus. The flower usually lasts only one day, and it’s brightly colored (usually in purple, pink, red or blue). The various Passiflora species can be found almost everywhere on the globe except for Africa. Many varieties have been naturalized beyond their native ranges since they can easily adapt to different climates and altitudes. The most widely recognized one used for medical purposes is the P. incarnata (maypop) that has been used for centuries by the Native American tribes as a folk remedy to treat a broad range of conditions such as muscle pain and cramps, burns, diarrhea, hysteria and stress. 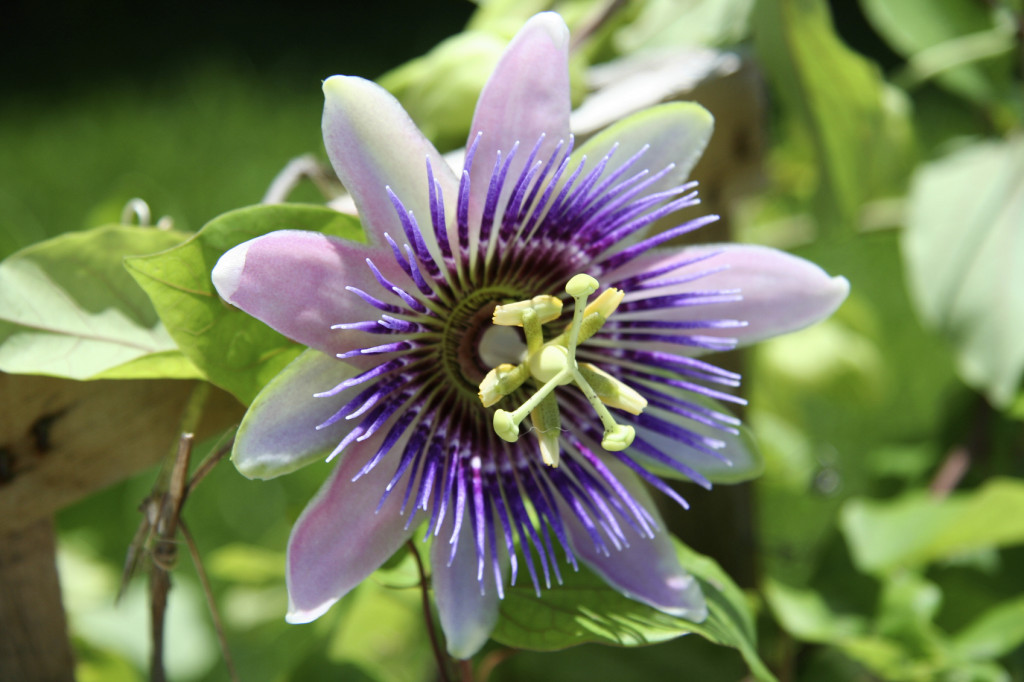 The active chemicals in passionflower are mostly harmala alkaloids (harmol, harmalol and harmine) and flavonoids (isovitexin, quercetin, luteolin, chrysin, apigenin and kaempferol) that constitute up to 2.5% of the total content. The herb is also rich in other components such as cyanogenic heterosides, tannins, coumarin and phytosterols. Its fruit contains high quantities of Vitamin C, carbohydrates and glycosides. The harmala alkaloids possess a weak activity as monoamine oxidase inhibitors (MAOIs) and may thus exert an antidepressant and calming effect that may also induce sleep. Extracts of passiflora, however, also possess a direct antianxiety activity that is independent of its sedative effects, so its final mechanism of action seems to be different from other drugs that induce sedation such as the benzodiazepines. Passion flower is indicated to treat stress-related anxiety, insomnia and relieve muscle cramps and spasms. Together with Valeriana officinalis (valerian) and Melissa officinalis (lemon balm), it is widely used in sedative products in Europe since it’s listed  is listed in the European Pharmacopoeia as a weak anxiolytic and analgesic. Other uses of this medicinal herb include the treatment of dysmenorrhea, premenstrual syndrome, constipation, dispepsia, and other gastrointestinal issues since it is also able to relax smooth muscle tissues and possesses inherent analgesic properties.

Toxicity and other uses

Passionflower is used for a broad range of other uncommon or not fully investigated uses. It is also appreciated for its anti-asthmatic and antispasmodic properties, and in Asia is also often employed to treat morphine and other narcotic drugs dependence, high blood pressure and to help during antidepressants weaning and withdrawal. Extracts from this plant are also used for its vermicidal, antifungal and antimicrobial activities. In the United States, the Food and Drug Administration prohibited its use in over-the-counter sedative preparations due to a risk of interaction with other herbal supplements or medications. Other substances such as benzodiazepines or barbiturates may, in fact, have cumulative effects leading to confusion, dizziness, ataxia or even hallucinations. Isovitexin may also contribute to induce goiter or worsen a pre-existing condition since it inhibits thyroid peroxidase.