How our muscles change as we grow older? As we age, muscles slowly lose their strength and mass, causing a loss of functional abilities that will lead to an increased risk of developing chronic metabolic diseases. This condition, called sarcopenia, not only diminishes the overall strength of the muscles reducing the functional independence of elderly people, but it also increases the risk of falling down, which coupled with the increased frailty of bone tissues, poses a risk for serious injuries and domestic accidents.

Lean muscle mass usually constitutes up to 50% of total body weight in adults, but the most common decline caused by aging lowers this percentage down to 25% when reaching an age of 75–80 years. The generalized muscle atrophy of the aging human body, leads to an equal increase of fat body mass, and it’s especially noticeable in lower limbs where muscles are reduced by up to 40% of their original mass. Aging muscles are not just reduced in terms of mass and volume, but they also lose functional and oxidative capacity. All these events may in turn contribute to increase the risk of developing type 2 diabetes, hyperlipidemia, hypertension and other cardiovascular diseases, as muscles will dispose of blood glucose in a less efficient way, while lipid deposition in skeletal muscle tissues is also increased. 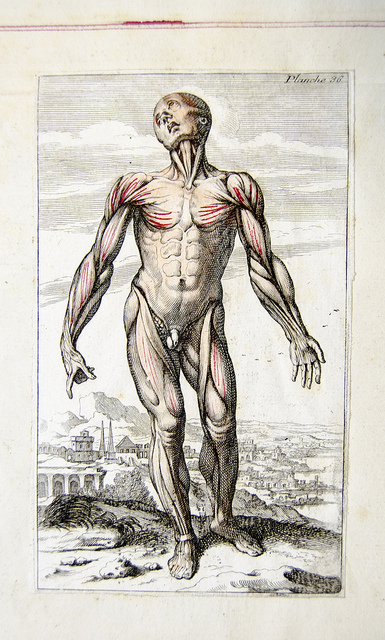 Why our muscles lose their strength as we age?

Muscle’s structure is mostly composed by proteins, that form the various filaments involved in the muscle contraction and relaxation mechanisms. New muscle proteins are continuously synthetized (anabolism), as well as older proteins are broken down (catabolism) in a dynamic equilibrium. If muscle protein synthesis decreases, or muscle proteins demolition increases, this equilibrium becomes unbalanced leading to muscle degradation and loss of strength. While in in younger adults who consume adequate proteins without performing exercise, skeletal muscle mass keeps remaining relatively stable, in the elderly the continuous muscle wasting seems not to be compensated by a corresponding muscle synthesis. One of most important factors influencing proteins turnover, is the dietary introduction of the basic protein’s components: amino acids. Muscles of aged people are less sensitive than the young’s ones to the amino acids ingested through food, and may require higher quantities of proteins to obtain the same anabolic effect. Also, resistance exercises and physical activity do stimulate a reduced increase in skeletal muscle mass in older people than in younger ones, representing the two key factors that could be held responsible for the age-related decline in lean muscle mass.

What can we do to prevent muscle aging?

Extensive researches were able to define specific strategies to maximize the therapeutic effectiveness of lifestyle intervention, aimed at reducing skeletal muscle mass decline in older people. Newer evidences suggested that an increased dietary protein intake that’s evenly distributed throughout the day, helps promoting muscle proteins synthesis by countering the blunted protein digestion and amino acid absorption. Also, it has been suggested that the addition of supplemental leucine to normal meals may significantly increase muscle protein synthesis in aged individuals. A correct dietary approach coupled with the correct physical activity, may assist the elderly in producing an optimal response that mimics the muscle synthesis typical of ‘youthful’ muscles.

The best approach to physical activity, instead, is a daily routine consisting of light intensity, high-volume resistance exercises. Resistance exercise with blood flow restriction acutely should be practiced frequently over time to counteract the “anabolic resistance” phenomenon. In simpler terms, other than avoiding sedentary activity, even a daily simple walking session of 20-30 minutes or a shorter sessions of more vigorous activities such as climbing a couple flight of stairs, is more than enough to promote an healthy lifestyle. In addition to all kinds of aerobic activity that help improve cardiorespiratory endurance, older adults can benefit from muscle-strengthening activities, especially those focusing on lower limbs. Stronger leg muscles help reduce the risk of falling and improve their ability to perform routine tasks, promoting personal independence. Physical activity also acts as a secondary prevention against cognitive decline conditions such as Alzheimer’s disease and dementia, and other common causes of mortality such as coronary heart disease, high blood pressure, stroke, type 2 diabetes, colon cancer and breast cancer.