Adderall and Vyvanse are two psychostimulant prescription medication used to treat attention-deficit/hyperactivity disorder (ADHD) and narcolepsy. Very few people do know that Adderall and Vyvanse are just amphetamine salts, however. Amphetamine, methamphetamine, lisdexamfetamine… how scary are these words when everyone associates them with the infamous “blue meth” street drug saw in the famous TV show “Breaking Bad”? How many scary pictures of thrash ex-cons and hobos destroyed by a life of meth abuse did we saw? How terrible and monstrous should sound the idea of giving our children a dose of this illicit substance to help them achieve better school results, be more concentrated, or sleep less because of their condition? Well, the worse monstrosity, is that these substances are all but illegal. These medications are in fact quite often used by many young students in our country, as athletic performance and cognitive enhancers due to the vast improvement in concentration they give. 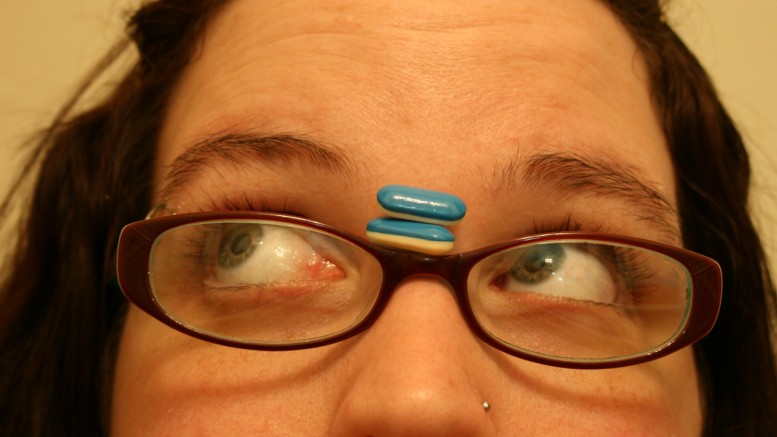 Adolescents and pills – Photo by: me and the sysop – Source: Flickr Creative Commons

Is giving amphetamines to our children really necessary?

According to the National Survey on Drug Use and Health, an estimated 6.4 percent of college students between the ages of 18 and 22 have used Adderall in a recreational way, making it the “study drug” everyone talks about (1). The worst part is that although several campaigns were able to market other illicit substances like marijuana and cocaine as evil, Adderall and Vyvanse are two prescription medication that are perfectly legit to use. We told our sons and daughters that drugs are bad that they must “say no to drugs”, and at the same time we taught them that medications are good, that they’re produced to treat diseased people, and to heal several conditions. It’s a twisted up message that endangers their safety and health, as the misconception that these drugs are “safe for children” makes youth and adolescents significantly underestimate the dangers associated with abusing these medications. Consequences of abuse can be life-threatening and permanent, and the risk for addiction is as dangerous as with any other illicit substance. Adderall’s own name seems to be quite aptly chosen, with that big “Addiction” prefix that sounds like a warning. Just like other illicit abuse substances, Adderall and Vyvanse often act as “bridge drugs” that actually increase the risk for an adolescent to end up using more serious drugs. The same study cited before revealed how students who used Adderall for recreational purposes, were eight times more likely to have used prescription tranquilizers recreationally as well. It is also quite easy to fake out ADHD symptoms to get a quick “fix” from an inexperienced doctor.

But the long-term consequences of these drugs should scare everyone, not just the students who abuse them to get better grades, test scores and finals week. Adderall and Vyvanse are class 2 controlled substances just like cocaine and morphine, and although they’re considered safe for patients who suffer from conditions such as ADHD, narcolepsy or even binge eating, they must be used under strict medical supervision. Constant abuse of these drugs can end up in severe addiction, anxiety and mood disorders, as well as other life-threatening consequences of sleep deprivation and exhaustion such as cardiovascular diseases or irreversible psychosis. Even more concerning is the fact that the doses used for recreational or concentration-boosting uses are usually significantly higher than normal prescriptions. Both these drugs are psychostimulants that increase the concentration of dopamine and norepinephrine in the brain, and this mechanism is known to be the one behind many other illicit drugs’ addiction (2).

Vyvanse is nothing more than a commercial strategy, as it was released by the same company that manufactures Adderall as an “upgrade” of this medication because Adderall XR’s patent expired in 2009. It seems in fact that the pharmaceutical companies only care about making a steady profit out of children and students who abuse these medications. The actual number of prescriptions did, in fact, increase steadily during the last 30 years, to the point that today it seems we’re facing a real epidemic of ADHD. Data from the Centers for Disease Control and Prevention show that the up to 15% of high school-age adolescents were diagnosed with ADHD, with the number of youths taking medications for this disorder increasing to 3.5 million from 600,000 in 1990 (3). It’s hard to understand how many of these diagnoses can be considered preposterous. However, we can’t but question how is that possible that the numbers increased by more than +500% in just 20 years. Too many times these drugs have been portrayed as safe or benign, even though they do possess several significant side-effects and a tremendous potential for addiction. The Food and Drugs Administration (FDA) itself has several times claimed that promotional campaigns and advertisement for Adderall and Vyvanse was either misleading, filled with overstatements about its efficacy, or not substantiated by adequate scientific proofs and clinical trials (4). After several Adderall and Vyvanse lawsuits were filed, in 2014, the pharmaceutical company Shire Pharmaceuticals LLC was forced to pay $56.5 million to resolve civil allegations that it violated the False Claims Act as a result of its marketing and promotion of several drugs, including Adderall XR and Vyvanse. “Patients and health care providers must receive accurate information about available prescription drugs so that they can make safe and informed treatment decisions,” said Acting Assistant Attorney General Joyce R. Branda for the Justice Department’s Civil Division. “The Department of Justice will be vigilant to hold accountable pharmaceutical companies that provide misleading information regarding a drug’s safety or efficacy”. (5)

Be the first to comment on "Vyvanse and Adderall: a monstrosity sold to our children"