Direct or chronic exposure to several dangerous substances such as organic solvents constitutes a well-known health hazard of everyday life. Solvent exposure can occur both on workplaces and industrial facilities, as well as inside and outside households as we can get in contact with dangerous substances that could pollute the air, water and soil, or even our furniture. Some profession such as painting, dry cleaning, and rubber manufacturing are at a greater risk for exposure. They can suffer of either acute reactions (toxicity to the nervous system, liver, or kidneys; dermatitis; respiratory impairment), or chronic long-term ailments such as neuropsychiatric effects, eye cataracts, and an increased risk of cancer.

A solvent is a substance used to dissolve another chemically or physically different one, called a solute, such as a gas dissolved in a liquid, to form a solution. Commonly used solvents are found in nail polish and hair extension removers (acetone, acetonitrile), paint and lacquer thinners (turpentine, naphtha), spray and aerosol pressurized liquids (propane, isobutane), perfumes (ethylic alcohol), and detergents (various terpenes). 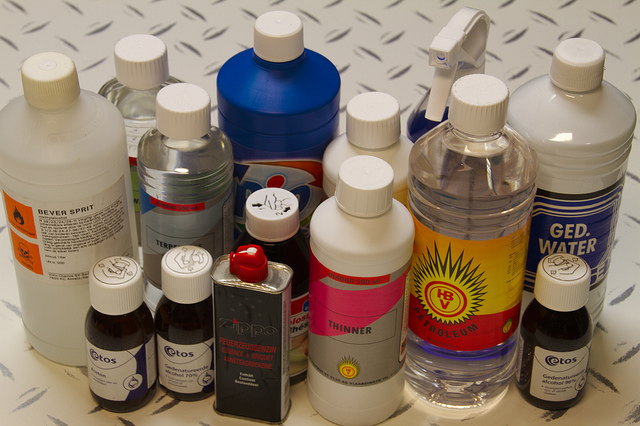 Benzene, Chloroform and Formaldehyde – the most common solvents

Benzene is probably the most commonly chemical found in the environment, as it comes from industrial discharge, motor vehicle exhaust, and even indoor tobacco smoking. Benzene is colorless, very volatile, and able to dissolve in water, and thus it can contaminate the environment by pass through the soil into underground water. Everyone is exposed to a small amount of benzene every day, mainly through breathing air containing small percentages of it. Benzene has been determined as a known carcinogen by many sources such as International Agency for Cancer Research (IARC), U.S. Environmental Protection Agency (EPA), and U.S. Department of Health and Human Services (DHHS). It has repeatedly been shown to induce hematopoietic cancers such as acute myeloid leukemia (AML) and cancers of the ovaries, mammary glands, pancreas, and liver, as well as being directly linked to birth defects.

Chloroform (trichloromethane) is mostly used in the chemical industry as a precursor to refrigerants and Teflon, and in medical practice as a solvent in nuclear magnetic resonance (NMR) spectroscopy. Chloroform may be found in small amounts in chlorinated drinking or swimming pool water, and may pose a risk for people who work with it, especially if inhaled. Acute inhalation exposure to chloroform in humans causes central nervous system depression and possible liver and kidney damage. Chloroform is suspected of causing cancer of the large intestine, rectum, and bladder.

Formaldehyde is a colorless flammable gas with a characteristic pungent smell. It has a broad range of uses, ranging from the production of fertilizers, glues, paper, pressed-wood household furniture, and insulating materials to a wide variety of other industrial uses such as fungicide, germicide, preservative, embalming fluid, and as an important precursor to many other materials and chemical compounds. Formaldehyde is normally present in both indoor and outdoor air at low levels (ranging from 0.02 to 0.04 parts per million), but various materials containing formaldehyde (such as plywood, furniture, and carpets) can release formaldehyde gas or vapor into the air. Other sources of this substance include cigarette smoke, automobile exhaust, gas and wood stoves, heaters, and glues/resins. Exposure primarily occurs by inhalation of formaldehyde gas and vapor, and by absorbing liquids containing it (such as formalin) through the skin. Effects of acute exposure to formaldehyde usually include eye and mucous membrane irritation, coughing, asthma, and headaches. Formaldehyde has been classified by both the IARC and EPA as a known human carcinogen, confirmed by various epidemiological studies. Professionals exposed to formaldehyde in their occupation, such as funeral industry workers and embalmers, showed an increased risk of leukemia and brain cancer compared with the general population. Other cohort and case-control studies found an association between formaldehyde exposure and nasopharyngeal and nasal sinus cancer.

Other common solvents of everyday life

Methylene chloride (dichloromethane, or DCM) is an organic colorless liquid compound used in degreasing metal parts, as a paint stripper, industrial solvent, aerosol and pesticides propellant, and in the manufacture of photographic film, textiles, and plastics. DMC is highly volatile, constituting a potential acute inhalation hazard that may lead to a carbon monoxide poisoning, hepatitis, and chemical skin burns. Methylene chloride is associated with various degrees of carcinogenicity, inducing liver, lung, and pancreas tumors.

Trichloroethylene is a clear nonflammable liquid used as an industrial solvent to remove grease from metal parts, and as dry-cleaning spot remover. In the past, it was also used to extract vegetable oils (e.g., soy, palm, and coconut oil), for coffee decaffeination, and as a volatile anesthetic together with nitrous oxide. Today Europe and North America replaced its pharmaceutical and food industry uses because of its acute and chronic toxicity. It enters the body mainly through inhalation of its vapors or direct skin contact, but it can also be ingested by drinking contaminated water in areas near factories or waste disposal sites. Other than the acute toxic effects reported after ingestion or inhalation of high levels this substance, such as kidney and liver damage and arrhythmias, trichloroethylene is considered probably carcinogenic to humans.

Be the first to comment on "Solvents: the dangerous chemicals to avoid in everyday life"