Non-suicidal self-injury (NSSI) is a serious psychiatric problem with complex origins characterized by the intentional, deliberate destruction of one’s body tissues performed for social reasons without suicidal attempts1. Self-harm do not include self-mutilation and is a repetitive behavior usually beginning at a younger age (generally between 14 and 24 years of age). Although NSSI is often associated with a significantly increased risk of suicide (up to 40-60% of suicides include some form of previous self-injury), the act of self-harming by itself is done without direct suicidal intents. Usually, the purpose is aimed at coping with distressing negative affective states such as anger or depression, inflict self-punishment and signal personal distress to important others2. Non-suicidal self-injury is usually associated or predictive of mental disorder, especially among adolescents and younger people. However not all individuals who engage in self-harming meet criteria for a mental disorder. NSSI is usually more frequent in adolescents, with some authors reporting more than 20% of teenagers engaging in self-harming activities in any given moment3. 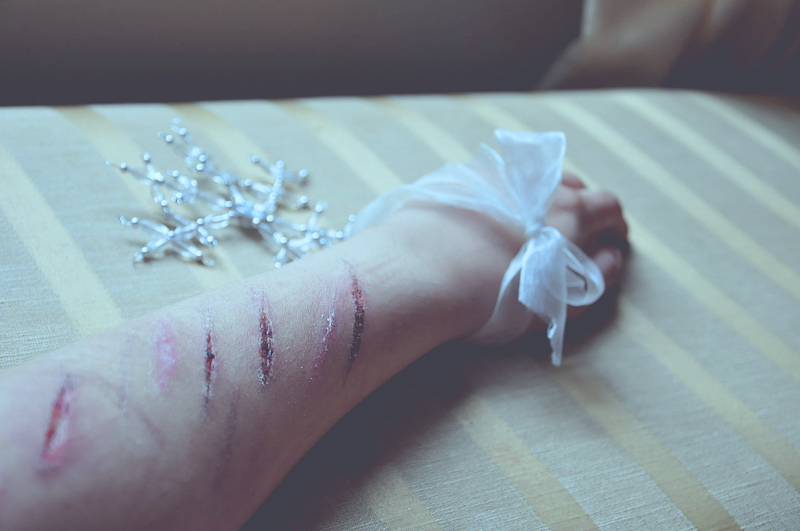 Self-harming: why and how it happens

The act of self-harming or its consequences may cause significant distress to the individual’s daily life, and it is performed deliberately (i.e., not as a result of a psychotic episodes, delirium, substance intoxication or withdrawal). The most frequent self-injury methods include skin cutting, burning, scratching and self-punching, but may also include banging or hitting body parts, interfering with wound healing, hair-pulling and the ingestion of toxic substances or objects. Usually, adolescents engaging in acts of self-injury report feeling minimal or no pain while doing it. However, the use of sharp physical pain is often used as a mean to distract the patient from their unbearable negative feelings4. The act of self-injuring is associated with negative subjective feelings preceding the act, and continuous thinking about self-harming even when the action is not taking place. The individual’s motivation may range from seeking relief from a negative state to dealing with personal issues or just achieving a positive feeling. Interviewed patients described the most common emotions after a self-harming episode as relief, anger, and calmness5.

Adolescents that engage in NSSI acts, usually show either compulsive or impulsive behaviors. While the former usually consist of ritual, repetitive behaviors and are often associated with hair pulling, skin picking or scratching and nail biting, the latter usually pertain impulsive form of aggression against oneself, like skin cutting, piercing and burning. Once NSSI habits start to manifest, they seem to become addictive for the patient, often proving to be very difficult to be discontinued. Non-suicidal self-injury is usually associated with longer-term negative consequences, for example, feelings of guilt and shame, and negative social reactions from peers and family that will further worsen the adolescent everyday life, leading to more NSSI acts6. Other reasons behind self-harming include the urge to receive positive attention from others, the necessity to regain control over one’s life, and a general sense of fulfillment to cope with subjective sensations of “emptiness”. It is also used by subjects to stop dissociative experiences as it gives them a sense of reality, or to avoid stressful situations by using self-harm as a threat. Most youths engaging in NSSI do it privately without telling anyone7.

Adolescents that engage in repetitive Non-suicidal self-injury acts usually show a significant comorbidity with other psychological and psychopathological conditions. The most frequents are; borderline personality disorders (BPD), troubled relationships with peers and/or family members, drug and alcohol abuse, eating disorders, chronic psychosocial and behavioral problems, developmental disabilities, bipolar disorder and depression8. Other conditions that may represent a contributing factor for self-harm include schizophrenia and autism spectrum disorders (ASD), with up to 30% of ASD patients engaging in self-injurious behavior at some point9. Negative body image and reduced levels of body protections are often reported in patients with a history of self-injury. For example up to 35% of women diagnosed with eating disorders such as anorexia nervosa and bulimia nervosa, manifest some form of self-injurious behavior10.

As NSSI is usually considered as a symptom of some other generalized psychiatric or personality disorder, treatment often aims at correcting these conditions which are often seen as the primary cause. The most commonly used treatments are the “therapeutic assessment” and psychological therapy, although involving the family in the support and treatment of adolescents engaging in self-harm practices is of the utmost importance. Family can help in decreasing conflicts, expand communication skills and improve problem-solving skills that may, in turn, reduce the chances of self-injury to happen11. The only pharmacological treatment that demonstrated to be specifically effective in reducing NSSI acts in both adults and adolescents was flupentixol, albeit this drug possess significant side-effects. It should also be noted that trials that investigated this medication effectiveness were small and somewhat outdated, leaving much space for uncertainty12, 13.

Non-suicidal self-injury is still a serious condition that often gets underestimated and treated as a secondary symptom instead of a proper condition. Many adolescents do engage in self-harming activities, and although they’re not strictly life-threatening, they will negatively affect their personal lives and development. No specific treatment approach has still been able to address this condition with enough success, suggesting that its true etiology still needs further investigation.