Hearing loss or hearing impairment is the third most common health problem in the U.S affecting 360 million persons in the world (5.3% of the world’s population). A large percentage of those suffering from hearing loss are elderly people aged 65 years and older [1]. Hearing impairment can occur suddenly, but frequently develops gradually, slowly affecting the quality of life and relationships of the patient. According to Audiologist Santa Monica, simple symptoms like having difficulty understanding what other people say, asking people to repeat themselves or watching television with the volume turned up higher than is usually required, are usually the first signs of a progressive loss of hearing. It’s at this point that many people then consider hearing aids.

Advanced age is the most common cause of hearing impairment, as up to one third of the senior population suffers from some level of hearing loss. This form of hearing reduction is called sensorineural hearing loss, and it’s caused by a slow, progressive damage to the sensitive hair cells inside the inner ear, or by the natural loss of function of the auditory nerve. Other than just occurring with age, this form of hearing impairment can be also caused by traumas and injuries. Although genes do play an important role in hearing loss due to age, exposure to loud or continuous noises, as well as high levels of noise in the workplace can be hazardous to hearing. Almost half of carpenters and plumbers report some form of hearing loss [2], but even living near an airport or a freeway can slowly damage hearing. Due to the great exposure to loud noises associated with modern society, hearing loss is nowadays much more frequent than in the last centuries [3]. Other forms of hearing loss, called conductive hearing loss do happen when something physically blocks the sounds from reaching the tympanic membrane (also known as “eardrum”). Blockages of the ear canal can include earwax, foreign bodies and fluids generating from an ear infection, but even a perforated ear drum or a disorder of the hearing bones can prevent sounds from being processed and perceived normally. 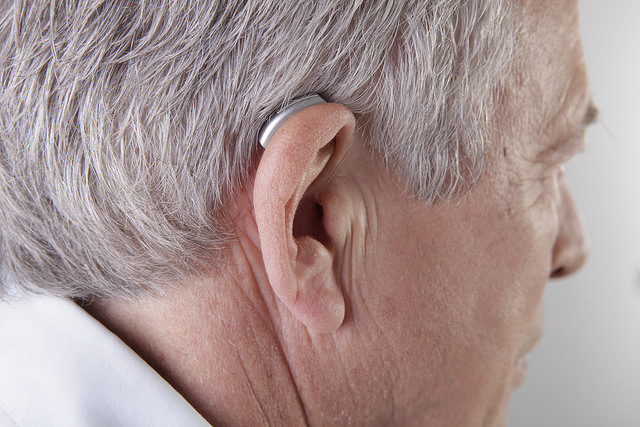 Even some medications are associated with hearing loss, actually damaging the ear due to a phenomenon called “ototoxicity”. Usually the first sign of ototoxicity is a ringing, clicking, hiss or roaring sound perceived in the ears, called tinnitus. There are more than 200 drugs that may cause permanent or temporary hearing and balance loss conditions, including macrolide and aminoglycoside antibiotics (gentamicin), nonsteroidal anti-inflammatory drugs (NSAIDs, such as aspirin and ibuprofen), cancer chemotherapy drugs (cisplatin, carboplatin), antimalarial medications (quinine), erectile dysfunction drugs (Cialis, Levitra, and Viagra) and diuretics [4, 5]. Other forms of hearing loss, called conductive hearing loss do happen when something physically blocks the sounds from reaching the tympanic membrane (also known as “eardrum”).

Treatment and management of hearing loss

Although there are no real preventive drugs or treatments to avoid hearing loss, the best form of prevention is avoiding loud sounds and walking away from noise sources. Albeit living in a noise-free space is not always possible due to the unavoidable urbanization of our society, a few simple measures can greatly help in preventing future hearing impairment. Advice includes: move away from sources of loud noises (lawn mowers, vacuums, hand drills), lower the volume of TV, radio or music, and use ear protection equipment at loud concerts or when working in noisy environments (factories, workshops, construction sites).

People who suffer from sensorineural hearing loss may greatly benefit from using a small device wore inside or behind the ears to increase the sound volume, called hearing aids. Hearing aids are designed to improve hearing and speech understanding by making some sounds louder, and consist of microphone to picks up sounds, an amplifier to make them louder, and a receiver to send the amplified sounds into the ear [6]. During the last 100 years hearing aid technology made a lot of progress, significantly improving the quality and effectiveness of modern devices since the first ear trumpet was invented back in the 17th century. The older and less expensive analog hearing aids that simply convert sound waves into electrical signals and then amplify them, are now giving ground to the newer and more modern digital hearing aids. These devices convert sound waves into numerical computer codes, providing much better flexibility thanks to their ability to adjust the volume and amplification of the sounds. Due to their advanced programming, digital hearing aids generate a much more believable perception of the surrounding environment, for example by providing the direction of the sound, or by automatically manipulating the information they provide depending on the situation (quiet rooms, concerts, restaurants, etc.).

Different types of hearing aids are available, depending on their placement in or on the ear. Behind-the-ear (BTE) hearing aids and receiver-in-the-ear (RITE) hearing aids are applied outside the ear, with the receiver located respectively outside or inside the ear. These devices are the less expensive and easier to apply, but they’re often shunned by most people as they feel wearing them is embarrassing and may negatively affect their social lives. In-the-ear (ITE) hearing aids fit completely inside the outer canal of the ear, and are best suited for people who suffer from moderate to severe hearing loss. They’re unsuitable for children with hearing impairment though, as their ear canal will keep growing. In-the-canal (ITC) and completely-in-canal (CIC) hearing aid are custom-built to fits the patient’s specific ear canal. They’re almost completely invisible, but they’re harder to adjust and remove once they’re fit.

More radical approaches to  hearing loss treatment include cochlear implants: permanent implants that work by artificially stimulating the cochlear nerve through an electric impulse. Cochlear implants are quite powerful devices suitable for people who are unable to use hearing aids, but are expensive and require specific programming as well as extensive training before the patient can actually use them to the fullest of their capabilities.