What’s the Kübler-Ross model and how can it help us cope with our grief? Sometimes during our lives, we must face one of the hardships humanity always dreaded the most: death. It could be the death of a close relative, a beloved one, our treasured pet, or even one’s own imminent death. Sometimes patients need to face their mortality when they’re diagnosed with a terminal illness such as cancer, or other end-stage conditions such as AIDS. Being forced to face impending death may force patients or their relatives to cope with much psychological distress that can negatively affect their own psychological, as well as physical well-being and health. Psychologist and healthcare professionals must know how to deal with the various stages of the mental and emotional process experienced by terminal patients and their families, in order to help them face the hardships of this often unbearable truth.

Psychology 101: the five stages of the Kübler-Ross model

One of the most well-known psychological models used to address and analyze the grieving process is the Kübler-Ross five stages model. Facing her own impending death after she was diagnosed end-stage cancer, the psychologist Elisabeth Kübler-Ross spoke of “anticipatory grief,” as a series of peculiar emotional stages through which people experience the process of mourning. Although there are no inflexible paths that define everyone’s personal journey towards death, the Kübler-Ross model regroups all the emotions suffered during this process in five generalized stages. These steps include Denial, Anger, Bargaining, Depression and Acceptance (also defined by the acronym “DABDA”), and recollect a plethora of different mental states that range from the initial negative feelings such as depression, anger, and isolation, to the final somewhat positive ones such as acceptance and introspection. 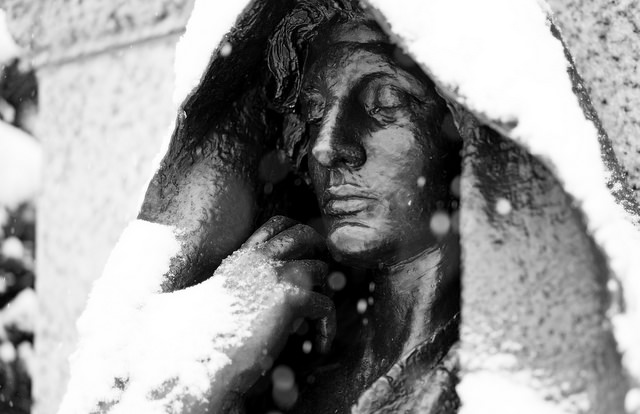 The first stage is usually known as the denial one. During this phase, all the subject’s efforts are focused on disbelieving the reality about the impending death. A relative may refuse to accept that the person he or she loves is going to die, while a terminally ill patient may wish to hear another physician’s opinion to avoid acknowledging the first diagnosis. Death anxiety may exert an unbearable weight over the person’s unstable emotional balance. The denial stage is thus often employed as a self-defense technique that helps the subject recollect his mental defenses and wrap his mind around the idea of the unavoidable destiny he’s facing. Some patients may never leave this stage, entrenching themselves in a pathological refusal state which may have detrimental consequences on their psychological health.

When the truth starts becoming so evident that the subject is not able to deny it anymore, anger and frustration are usually his next, most obvious reaction. Strong emotional responses such as rage and fear, make the person unable to control himself from venting his hostility to anyone who’s nearby. Family and relatives may be blamed for his grief, while doctors and hospital personnel are often viewed as incompetent enemies who can’t provide adequate care to him or to the beloved one who’s dying. Even God may be considered guilty of this unlucky turn of events, and question such as “Why is this happening to me?” or “Why nobody gives me an explanation?” often cloud his mind and judgement. Grief and mourning are used as a weapon to attack other people, and explosive outbursts of rage may become dangerous especially in those individuals who are naturally inclined to violence. The patient is desperately reaching for help, and depending on whether this is successfully provided to him or not, his mood may turn from furious to deeply saddened in a relatively short time span.

Often considered as a transitory phase, bargaining is a strategy employed by the subject to mentally build a fictional solution that may help him avoid the problem. Also known as “negotiation”, during this step of the grieving process the patient tries to trade something that possesses a great value with an imaginary or tangible external force, in exchange for salvation. He may, for example, seal an imaginary pact with God by trying to reform his lifestyle, or ask for forgiveness to all those he wronged in his past. He may also attempt to repair the damage he did to other people or himself, or even “trade” his health or money in exchange for the survival of the person who’s dying with religious or spiritual figures such as priests, magicians and quacks.

Although in the Kübler-Ross model the fourth stage of the grieving process is traditionally considered the depression one, many individuals often experience this phase through their entire journey. Depression is a powerful setback that prevents the subject from attaining the mental balance that follows acceptance, and they need to walk through a difficult trial of deep introspection. Gloom and sadness represent the mainstay emotional states of this stage and are often experienced when the progressive worsening of the disease precipitate the physical condition of the person who is going to die. As the quality of life is negatively affected by the additional limitations imposed by the disease, the patient starts losing decisional power over his life and social relations. The subject suffers from the anguish of loss, and reactive depression exerts a heavy toll on his ability to perceive his body image and perform routinary activities. Preparatory grief leads the patient to a state of constant defeat. When the unavoidability of the dying person becomes clearer, fighting starts being perceived as futile. Question such as “I’m going to die soon so why should I keep fighting on?” or “If I’m going to lose everything, why should I bother with anything?” drain the person of all his energies and hopes, often leading him to a secluded state of solitary mourning. Although preparatory grief may often be confused with clinical depression, the caregiver should acknowledge the differences with this condition as soon as possible, because pharmacological treatment is usually detrimental during a grieving process.

The final stage of a subject’s journey towards imminent death is acceptance. During this phase, the individual embraces mortality and learns to cope with the unavoidability of death itself. Knowing that death cannot be postponed nor avoided, the subject learns to focus his energies on productive activities that help him stabilize and reinforce his emotional balance. Dying people often reach acceptance of their own mortality before their relatives do, helping them cope with the unbearable grief with their calm and reassuring behaviours. All the other emotions of the other four stages are still present, although their intensity is much inferior as the individual learned how to handle them. The person can now reconvert negative feelings into useful activities, such as funnelling his rage into productive energy, or his grief in a deeper empathy to help other saddened people. The dying person takes his time to say goodbye to anyone who he loved, and time is devolved into drafting his material and spiritual will. Although acceptance is typical of end-stage conditions, as death becomes more imminent fits of unmanageable negative emotions may still be present. Preparation for the moment of death is a part of acceptance, however, denial, anger and depression can still be very strong during the last moments.

Be the first to comment on "Coping with grief and death: the Kübler-Ross model in terminally ill patients"