Benzodiazepines (BZD or BDZ), also known as “benzos” are a group of psychoactive drugs that exert their therapeutic effects by increasing the GABA-A receptor activity within the brain. There are several different benzodiazepines available on the market that differ from the duration of action, potency and effects. Depending on the particular benzo, they have different medical uses ranging from the treatment of anxiety and seizures to anesthesia premedication. The potency of the specific effect varies from benzo to benzo, but they all act as anxiolytics, hypnotics (sleep-inducing), sedatives, anticonvulsants and muscle relaxants1.

Xanax: the most prescribed antianxiety medication

The most widely prescribed and uses benzodiazepine in the United States is Alprazolam, both as the branded Pfizer’s Xanax medication and as a generic, accounting for over 94 million prescriptions in just 2013, more than half of the total benzos prescriptions2. Originally produced and sold by Pharmacia and Upjohn (now Pfizer), Xanax has been marketed for treating anxiety as well as panic attacks. Not just the most popular benzo, Xanax is also the number one most prescribed psychiatric drug, topping all other antidepressants because of its characteristics3.

While antidepressants and mood stabilizers effects actually require at least three or four weeks to kick in, Xanax is a quick, fast acting drug that provides immediate relief from anxiety. For this reason alprazolam and other benzodiazepines such as diazepam (Valium) and lorazepam (Ativan), are used as a bridging medication to provide a temporary relief to psychiatric patients while they wait for antidepressants to kick in. However, although benzos are purely psychoactive drugs, they’re often prescribed way more by family practice or internal medicine doctors than by psychiatrists. Primary care doctor’s prescription totaled over 44 million prescriptions in 2013, which is more than three times the 13 million Xanax prescriptions coming from specialists2. However, Xanax and the other benzos are all but safe drugs, especially if prescribed without a careful review of its risks and benefits. 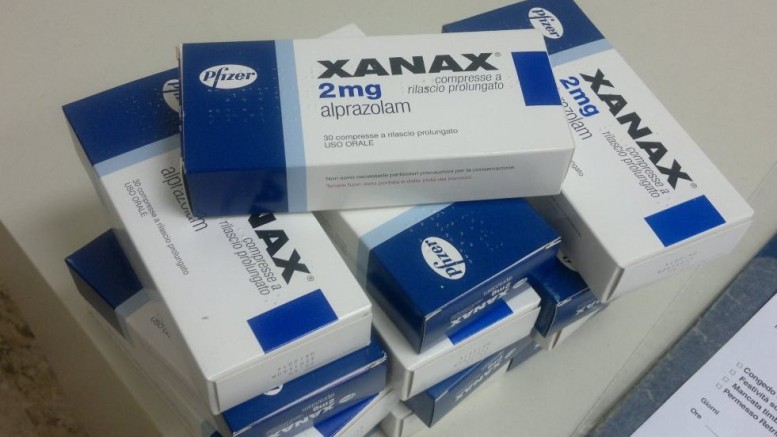 The subtle and not-so-subtle risks of benzodiazepines

As all other antianxiety medications, benzos are prescribed to treat patients that should by all means considered vulnerable. Other than just for the treatment of anxiety, benzos are used alcohol detoxification to treat addiction. However they’re a highly addictive medication as alcohol, if not much worse. Physiologic and psychologic dependence is the first, most evident short-term side effect of benzos, and will develop in just a few months especially with high-potency, short-acting agents such as Xanax. Patients who suffer from benzodiazepines addiction will end over relying on the medication to treat their anxiety, often combining it with alcohol to obtain the desired effects. On the other hand, the primary symptoms of short-term benzos withdrawal are anxiety itself, triggering a vicious circle in which the patients keeps increasing its medication dosage to keep up with his addiction. Protracted withdrawal and addiction to higher doses may also lead to more serious symptoms such as depression, sensory hypersensitivity, insomnia and even seizures4. Benzodiazepines are also dangerous during pregnancy, as they can reach the fetus leading to prenatal exposure that may cause consequent withdrawal symptoms in the newborn5.

Long-term effects of benzodiazepines may also negatively affect both mental and physical health as well. Other than the risk for addiction and withdrawal described above, benzos can be associated with a risk for depression. Emotional clouding and blunting can lead to suicidal ideation and the insidious weakening of the patient’s ability to cope with negative emotions and common stressors of everyday life6. This “emotional anesthesia” can subtly affect the entire patient’s life, leading to employment difficulties and social deterioration, and can be the cause for panic attacks instead of treating them. Benzodiazepines such as Xanax or Valium may also negatively affect a patient’s personality by causing irritability, aggression and disinhibition especially in children and older people7. Other dangerous benzos long-term use side effects include a whole range of mental and cognitive deterioration, which may be permanent even after the drug was tapered down. Memory impairment, dizziness and lack of concentration are the most evident of these effects, as benzos such as midazolam (Versed) are known to cause the short-term anterograde amnesia that is particularly appreciated for pre-surgical medication. However episodic memory can be severely impaired, occasionally leading to blackouts and other significant memory lapses that can damage a person’s social and working life4, 7.Psychomotor effects such as slow reactions, poor concentration, lack of motor coordination and drowsiness may also increase the risk of motor vehicle crashes in patients who under these medications8.

Elderly are even more susceptible to the adverse reactions of benzos, both because of the decreased rates of their metabolism (the ability of the body to “wash out” a drug) and because the risk of drug interactions is higher as well. Cognitive impairment, memory loss, and paradoxical disinhibition are more frequent in elderly patients, leading to violent behavior, irritability and exacerbation of seizures in epileptics4, 6. Old age people using benzos also showed an increased risk of falls, leading to femur and hip fractures9. Lastly, benzodiazepines use can cause dementia, being the leading cause of drug-induced dementia accounting for at least 10% of total cases, according to statistics10.

Xanax and the other benzodiazepines can also outright kill patients. Benzos abuse can, in fact, lead to unintentional drug overdosing, especially if coupled with other central nervous system (CNS) depressants such as ethanol and opioids. Benzos misuse and abuse are becoming more and more common, and while their toxicity is somewhat manageable if taken alone, overdosing when under the effects of other substances may prove to be fatal11. However, benzodiazepines and opioid analgesics are very often prescribed in combination, as demonstrated by recent findings that showed that over three-quarters (77.2%) of total benzodiazepine-related deaths involved the use of at least one opioid. Benzodiazepines alone contributed to almost one-third (29.4%) of the 38,329 drug overdose deaths in the U.S. in 201012. What’s even more alarming, though, is that the phenomenon is rapidly increasing. From 1999 to 2009 the number of deaths attributed to benzodiazepines saw a 5-fold increase, with Xanax showing the highest increase in mortality (233.8%), together with Oxycodone (264.6%)13.