Heart diseases are the first cause of death in the US, accounting for at least one-quarter of total yearly deaths. Every year roughly 735,000 men and women suffer from a heart attack and most of the risk factors associated with this event are pretty common habits of modern lifestyle. Risk factors do in fact include smoking, overweight and obesity, unhealthy lifestyle (inappropriate diet, lack of physical activity) and alcohol abuse. Other conditions that may represent a risk factor for heart attacks are also very common diseases such as diabetes, high blood pressure, atrial fibrillation and high cholesterol [1].

What happens during a heart attack?

Heart muscle has no equivalent in the human body: his structure possesses unique functional characteristics that allow it to endure the heavy burden of being able to consistently, continuously and reliably contract more than 1 billion times during an average lifetime. The contraction of the cardiac fiber is a mechanism consisting of a sequential polarization and depolarization of cardiac cells. The action potential is generated by specialized cells called pacemaker cells and is divided into several phases. During these stages calcium enters and exits from the cells, resulting in a rhythmic contraction and relaxation of the heart muscle fiber [2]. The contraction of cardiac muscle fibers requires a lot of energy, and this energy can only be provided by a constant flow of fresh oxygenated blood supplied by the coronary arteries. For this reason, whenever the heart does not receive enough blood for any reason (a blood clot, a coronary spasm, a vessel blocked by atherosclerosis), the muscle fibers begin to die causing a heart attack or a cardiac arrest. 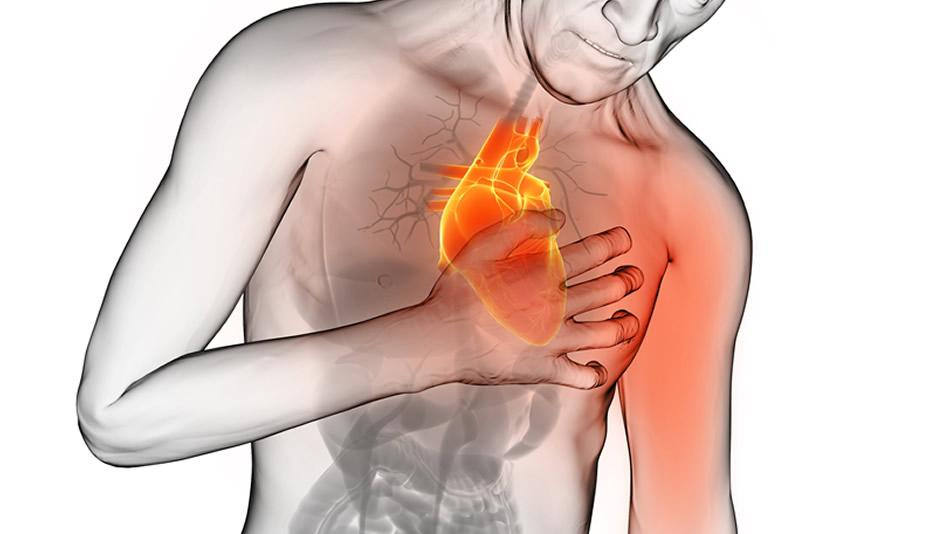 When a coronary artery is completely blocked (by cholesterol or a blood clot), a large portion of the heart muscle cannot receive the blood required to properly function, causing an ST-segment elevation myocardial infarction (STEMI). An emergency treatment is needed to restore the blood flow through the artery. The area is revascularized through intravenous administration of thrombolytics (clot busters), or mechanically with a flexible catheter (angioplasty). Treatment and causes of non-ST segment elevation myocardial infarction (NSTEMI) are very similar, although these heart attacks are usually less dangerous for the patient’s health as the artery blockage was either temporary or just partial. When coronary arteries are not blocked, yet the heart requires more oxygen that it’s provided by the blood supply because of an infection, then an abnormally fast heart rate (tachyarrhythmia) may occur, as well as anemia and demand ischemia. Lastly, other abnormalities in heart function such as electrolyte disturbances (magnesium, calcium or potassium), congenital anomalies, or a reduced pumping function can cause a cardiac arrest. Although most heart attacks will end in a potentially fatal cardiac arrest (the heart stops beating), usually most heart attacks start with life-threatening abnormal heart rhythms (arrhythmias), such as ventricular fibrillation (VF) or ventricular tachycardia (VT).

Differently from what you saw in the movies, heart attack symptoms could be much more insidious and less visible than you can think. Although a few people suffer from the classic Hollywood-style hearth attack, usually very few people will end clutching their chest or arm, gasp for air and then fall to the ground in a cold sweat. As the chances of surviving a heart attack are greater when emergency treatment begins as quickly as possible, knowing how to recognize properly the insidious symptoms of this condition may save your life. Early treatment can also significantly reduce heart- and brain-tissue damage, so recognizing even the subtlest hint of a heart attack is of paramount importance to call 911 as soon as you can.

The first symptoms are often misunderstood for simple indigestions or abdominal discomfort, delaying treatment up to several hours. Symptoms range from the classical pain in the chest to a subjective sensation of fullness or abdominal pressure, or discomfort in nearby areas such as the back, arm, shoulder, stomach, jaw or neck. Other symptoms include lightheadedness, a general shortness of breath, nausea, or cold sweating. Women’s symptoms may be a little different and often less obvious than men’s one, often manifesting as a generalized sensation of discomfort, dizziness, nausea and unusual fatigue when performing day-by-day activities.

However, another quite common condition called angina may cause similar symptoms, and albeit it should still be considered as an important warning sign that something is not working as it should, there’s no reason to be excessively scared by it. Angina pectoris is caused by a temporary shortage of blood that causes oxygen deprivation to heart muscles. Angina manifests as a mild to moderate pain in the chest or a sense of pressure, squeezing or discomfort that can also extend to other areas similarly to what happens during a heart attack. Angina can be triggered by physical activity or emotional stress, and it’s usually short-lasting, often disappearing with just a bit of rest or by taking the appropriate medications such as nitroglycerin. Symptoms of stable angina are usually entirely predictable such as the triggers that may cause or exacerbate them. Unstable angina is a bit trickier to spot, as its symptoms are often unpredictable and do not disappear with just rest. If taking an angina medication does not stop the pain, or it’s the first time you’re experiencing chest pain, however, it’s still better to call 911 and ask for help as soon as possible.

Be the first to comment on "Pain in the chest – a heart attack or a simple angina?"