In 2014, the pharmaceutical giant Johnson & Johnson became the subject of one of the largest consumer advocacy litigations in history. The prosecution alleged the company knowingly caused the spread of ovarian cancer through their best-selling talcum powder cosmetics, Johnson’s Baby Powder and Shower-to-Shower.

The proceedings began in 2009 after a South Dakota resident by the name of Diane Berg decided to file a litigation against J&J’s product stating it was the reason for her ovarian cancer. The defense attorney cited the pharmaceutical company was to blame for gross negligence since it did not warn its consumers anywhere of the high association of cancer from long-term exposure. Diane Berg was diagnosed with ovarian cancer in 2006, at the age of 56, after using the cosmetic talc for more than 30 years. In 2013, Berg was offered a $1.3 million out of court proposal by the pharmaceutical giant, who asked her to settle down her case and to sign a confidentiality clause. But the woman chose to warn the rest of the world about the dangers of the product and kept fighting her battle. In 2016, a jury from South Dakota confirmed that the powder contributed to her cancer, thanks to the combined efforts of the Law Offices of Ronald B. Laba, APC and Onder, Shelton, O’Leary & Peterson (1).

Several Talcum powder lawsuits have been filed by patients who accused Johnson & Johnson of being responsible for the cancers they developed after exposure to the talc. Many who used the cosmetic products such as baby and adult powders to “freshen” their underwear, in fact, later developed ovarian cancer. According to plaintiff litigations, Johnson and Johnson intentionally sealed classified information about the links between cancer risk after talcum powder exposure. For more than 40 years, they purposely did not warn women of all ages about the risks, hiding all the evidence in their hands (2).

Jacqueline Fox died of the same cancer type in October 2015, after using the Johnson’s Baby Powder for her entire life to help her “stay fresh and clean”. The Saint Louis jury who decided the verdict found the pharmaceutical giant guilty of conspiracy, negligence, and failure to warn women of the increased cancer risk associated with the use of cosmetic talc in the genital area. Their sentence was shocking: Fox’s family was awarded $72 million in compensatory and punitive damages (3). Recently Canada issued a class-action litigation after four women developed ovarian cancer claiming long-term exposure to Johnson’s Baby Powder. This comes after multiple lawsuits emerged in the US. 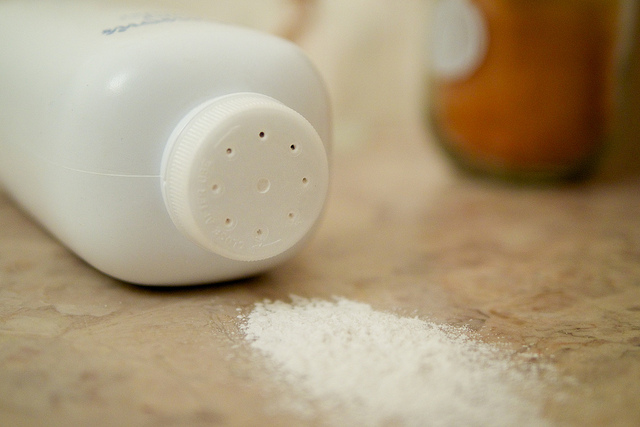 In 1892 while working, as the first director of scientific affairs for Johnson & Johnson, Dr. Frederick B Kilmer invented what was known today as Johnson’s Baby Powder. He got the idea of using scented talc powder after he received a letter from a colleague. His co-worker explained that many patients were suffering from skin irritations from the medicated plasters available in that age. Kilmer advised the doctor to try using his new product to ease the skin irritations and sent him the first can of the famous powder (4).

The branded product got its first public debut shortly after, in 1893, and could be found in all major catalogs by 1894. It was packaged in a yellow and red tin labeled “for toilet and Nursery.” Johnson’s Baby Powder is known for its one of a kind smell that most mothers would say could be associated with a newborn baby’s one. The smell has become so popular that it wasn’t just used for cleaning supplies only, but for diapers as well. To this day, all of J&J’s baby products have this one of a kind trademark smell. In just a few years, mothers found new ways to use their favorite talcum powder and started sprinkling it right onto their sanitary napkins believing it gave a clean, comfortable, dry feeling helping to replace vaginal odors. Unfortunately, the same women who used the product also unknowingly filled their reproductive organs with high levels of a carcinogenic material (5).

How acceptable is the idea that a product that has been sold for decades to our children can cause our death? Does talcum powder cause cancer? These genital powders have been used thanks to the natural properties of talc. This magnesium silicate is, in fact, able to absorb moisture and water, making it useful to keep the skin dry in babies as well as in adults. Among its most widespread uses, talcum-based cosmetics are often sprinkled on babies after their diapers have been changed, or on adult underwear and shoes to absorb “bad smells”. Other than for dusting, talcum has been also extensively used to reduce friction in contraceptive devices such as condoms and diaphragms, further increasing direct contact with the internal tract of the female reproductive system (6).

The epidemiological data and the clinical studies

For many years science struggled to found a general consensus on whether a correlation between cancer and talc exposure did exist (7). Many studies found significantly different results, with some reporting an increased risk and others reporting no increase. Researchers’ opportunity to adequately assess the possible correlation has always been complicated by several challenges. The first one is the absence of properly documented medical reports of talc use. All studies must rely exclusively on patients’ self-reporting, generating a strong bias in many observational studies. Quantification of talc dose exposure is also quite complicated. Not only various cosmetics may contain significantly different talc concentrations, but the method through the powder is applied (sprayed, sprinkled, directly application, using swabs, through sanitary diapers, etc.) may substantially affect the quantity that comes in contact with genitals (8).

Since the evidence from case-control studies was mixed at best, in 2006, genital exposure to talc has been classified as possibly carcinogenic to humans (carcinogen group 2B) by the International Agency for Research on Cancer (IARC) (9). However, larger meta‐analyses and cohort analyses have been extensively investigated later to scavenge for a possible correlation, and found substantial increases in the risk factor for ovarian cancer (10). In 2015, a formal systematic analysis published in the International Journal of Gynecological Cancer found that the of risk ovarian cancer after talc exposure was increased by 30–60% in almost all well‐designed studies (11). Although strong enough evidence to provide a final answer may still be lacking, even a modest increase in risk factor may constitute a potential threat to public health. According to clinical evidence, elimination of talc use could protect more than one-quarter of women who develop ovarian cancer (11). Cornstarch products are often sold at the same price as a good alternative for the genital area, and they have been recommended by the American Cancer Society as absolutely risk-free (6).

How does talcum powder cause cancer? The mechanism of action

Talc may contain asbestos, which has been classified as a known human carcinogen as it may increase the risk of lung cancer and mesothelioma when inhaled (12). However, purified talcum used in modern cosmetics is now asbestos-free. Thus, no increased risk of lung cancer has been reported (6). Most of the evidence analyzed so far instead, suggest that talcum particles might cause ovarian cancer when they travel inside the genital tract through the uterus and fallopian tubes until they reach the ovaries. Cancer in the ovaries is the gynecologic cancer with the highest mortality rate, mostly because it’s often detected at later stages when prognosis is very poor already (13).

The exact role of talc in carcinogenesis is still unknown. Talcum powder may act by inducing chronic epithelial inflammation of the pelvic area. Talcum-using women who underwent tubal ligation surgery showed a 50% reduction in risk. This result may suggest that stopping the ascension of talc particles to the upper part of the genital tract is, in fact, an effective method to prevent the risk by protecting ovarian epithelium from exposure to inflammants (14). Another possible role of talcum in ovarian carcinogenesis could be its ability to suppress anti-MUC1 antibodies. These antibodies have been, in fact, associated with a lower risk of cancer and a more favourable prognosis. This mechanism does not require direct contact of talc particles with tissues, also (15).